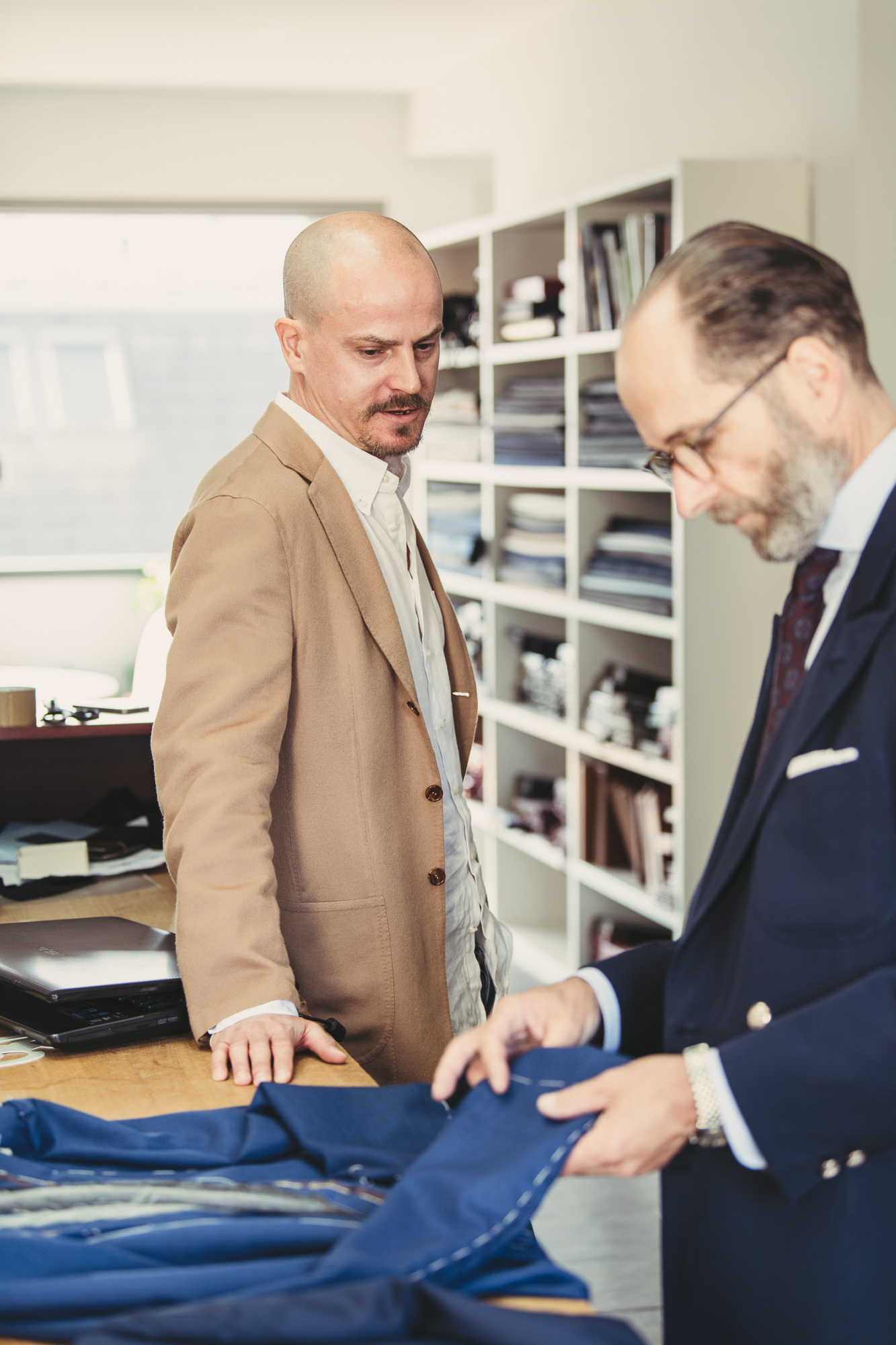 I’d like to present to you the best German bespoke tailors, shoemakers and shirtmakers in a sequence of articles. As an introduction I’d like to give you some background information.

It seems nowadays that the craft of tailoring is an English invention that the Italians copied after the war but of course this is not true. Tailoring was a craft known in all countries of Europe and one could order decent clothes everywhere between Stockholm and Naples. And when Europeans settled in other parts of the world they took their tailoring tradition with them. Local craftsmen were trained and most of them quickly adapted to the European techniques. This is why we find a rich heritage of bespoke tailoring in many parts of Asia, in South America and of course the USA.

The quality of workmanship that you found anywhere in Europe depended on the price you could pay but for the rich there was no need to travel to London to order a suit because the best tailors of Hamburg, Berlin, Munich or any other bigger town worked just as well as their colleagues in the West End. English and Scottish fabrics were available in most countries and used as the top quality alongside local weaves. Good fabrics were made everywhere in Europe using wool from sheep living locally or imported fibres.

The number of tailors was huge in the late 19th century everywhere in Europe because ready-to-wear did not exist yet – with the exception of children’s wear which was sold off the rack since the 18th century. If one could not afford a tailor one had to wear second hand clothes which was the only option for the majority. In Germany the decline of tailoring started slowly in the 1930s when department stores started offering ready-to-wear clothes in a big way. Nevertheless the middle and upper classes still preferred custom tailoring until the 1950s. In 1956 the impressive number of 47.115 men’s tailors with 92.581 employees where officially registred in West Germany, not counting outworkers who worked from home. In 1994 only 1.429 businesses were left in reunified Germany with 4.529 employed cutters and tailors.

Today tailors are even harder to find but a limited number is still alive and kicking.

The Federal Association of German Bespoke Tailors (“Bundesverband der Maßschneider”) lists about 90 ladies’ and men’s tailors as their members. As not every is part of the association we can assume that around 100-120 craftsmen are still active in Germany. This looks like a big number but of course only about a third of these craftsmen make bespoke clothes exclusively, many make their main turnaround with mtm clothes.

Competition has led to the survival of the fittest and the few remaining businesses have noticed an uprise in orders in the last ten to five years. People have started rediscovering handmade clothes in the 1980s but now, after twenty years and steadily rising prices, Germans start to turn away from Italy’s luxuriously priced made-to-measure labels towards craftsmen in their neighbourhoods. And although some of them have a slightly stuffy appearance they do understand modern fashion better than tailors in other European countries because since the 1920s German tailors tried to compete with ready-to-wear rather by being fashionable than classic. This attitude is very different from the English position that prefers not to change at all and sees fashion as a dreadful modern invention.

If one compares the tailoring traditions of Europe the Germans need not fear any competition in the quality of the workmanship, for instance buttonholes are usually stitched with much greater care than in English workrooms and pattern matching is done with almost scientific precision. The weak point used to be the heavy stuffings and interlinings that gave the wearer the appearance of a dress dummy. Much fun and mockery has been made of the German tailor’s preference for horsehair canvasses but in the last 30 years most craftsmen have learned to make a much softer and lighter suit and the traditional heavy armour has almost completely died out. This is partly the result of the strong presence of Italian makers like Brioni or Kiton who had a strong presence in the German market since the late 80s. They set a new standard of soft tailoring that pampered the customers and forced the tailors to follow this trend.

A real peculiarity of German tailoring is the system of training which also applies to other crafts. The training lasts three and a half years and it takes place both at the workshop of your master, the „Meister“, and at a state school where the theory of the trade is taught in addition to basic topics like Mathematics, German or Chemistry. After the training you must do a final exam. Afterwards you are permitted to be employed as a tailor, if you decide that you want to become a master of the trade you must take another training course at your own expense, usually an evening school that is visited after work. At the end of this additional master course another exam has to be passed and a master piece, the „Meisterstück“ has to be produced. Only tailors with the officially approved title of „Meister“ are allowed to train new tailors and to call themselves „Maßschneider“ which means custom tailor. This system may seem a bit rigid, nevertheless it ensures certain standards of training and workmanship.

The training of bespoke shoemakers is similarly formalized. It puts great emphasis on the ability to deal with problem feet. This has the advantage that German custom shoemakers are great experts in measuring and fitting. They do not only measure the feet with a tape measure and draw their outline on a piece of paper on which they also note any irregularities and problems like their English colleagues. In addition they will measure the back and sides of the feet and take their imprint on carbon paper. Finally they will measure the feet with the desired type of heel which is placed under the customer’s feet to get an idea of the foot’s position in the shoe. The whole procedure usuall takes more time than in England or Italy but is similar to the tradition of Austria or Hungary. But of course the fit is only one aspect of a custom shoe, the other is the way it looks. Many German cobblers of the older generation go for a very sturdy and solid construction but the younger ones have been strongly influenced by English, Italian, French and Austrian artisans which results in a shoe that offers the best of all words.