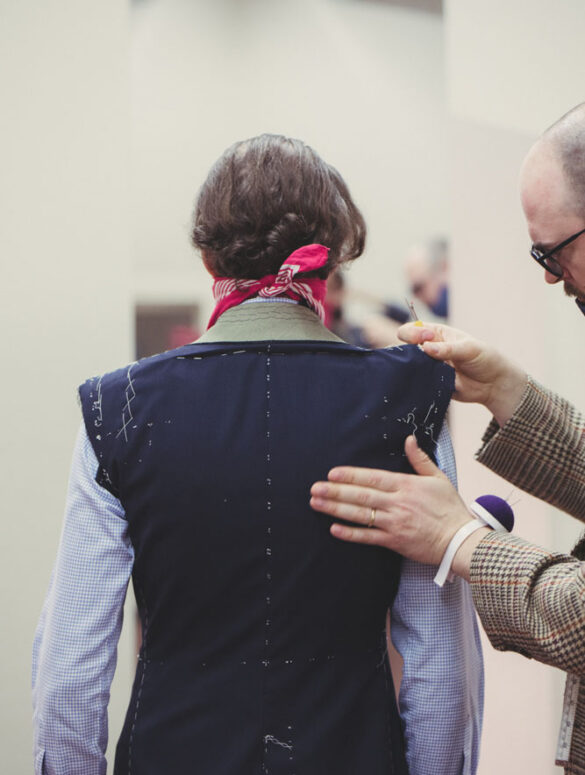 James Whitfield is as far as we know the only genuine Savile Row tailor running a bespoke business in Germany. We’ve known him for a couple of years, now we wanted to get a first hand impression of his tailoring art. Witness the process in our series of articles.

You are reading Part 2. You can find Part 1 here. We will publish the third and final instalment soon, with the finished jacket.

When I approached James’s address in Wilhelmshavener Straße in the district Moabit of Berlin, I saw him sitting outside of a cafe with a young woman. They had just paid and were about to leave. The woman turned out to be Marie, the tailor that James has trained and is now working for him. I had seen her account on Instagram already.

James sported a Harris tweed jacket, paired with 501s from Levi’s and midbrown, well-worn Clarks Desertboots. To wear tweed in May is typical of James. I had chosen a lightweight jacket made by Fabry & Hofmann in München of a cotton and linen fabric, although no sunshine had been predicted. Tweed was definitely a good choice for this morning.

James had cut a blue fabric instead of the checked cloth from Scabal for the “toile fitting”. For the fitting, the sleeves had been basted in which is typical for English tailoring. James finds that the customer will get a better impression of the garment. I agree that it is harder to get the overall picture of the jacket without sleeves, especially so for first-time customers.

I liked the look of the jacket immediately because it was exactly what I had asked James to cut. I wanted it fairly close-fitting with a traditional three-button front, a fair amount of waist suppression and accentuated but not padded shoulders. To prevent my shoulder bones sticking out, James had added just a little bit of canvas to the shoulder, which created a nice straight silhouette. The jacket was a bit tight under the arms but this will be fixed in the next stage. The balance was very good.

While Tommi was still preparing the camera James already starting working on the back of the jacket. My shoulders are pretty square and the jacket was cut for a tad more slope which caused a few creases. This was corrected quickly. Afterwards James unpicked the sleeves and improved the fit of the front. The jacket will get a little bit of extra length. The pockets will be jetted with flaps and not patch as I had accidentally written in the report of our last meeting.

After the fitting James altered the paper pattern by cutting out a bit here and adding some there using paper scissors, ball pen and stapler. This took about ten minutes of concentrated work. Later James will use the new paper pattern as stencils to draw the pieces of the jacket on the checked fabric from Scabal and cut it. The next fitting, the first one with the final fabric, will take place in about four weeks.