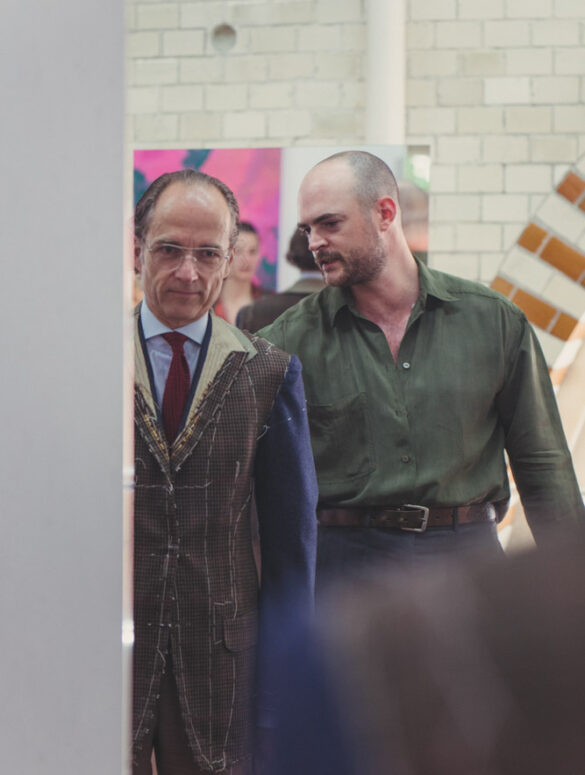 James Whitfield is as far as we know the only genuine Savile Row tailor running a bespoke business in Germany. We’ve known him for a couple of years, now we wanted to get a first hand impression of his tailoring art. Witness the process in our series of articles.

You are reading Part 3. You can find Part 1 here and Part 2 here.

It had been a dream of mine since the late 1980s to have a suit made in Savile Row. In 1998 this dream came true when I ordered a double-breasted suit from Tobias Tailors. Until 2004 I ordered suits and shirts almost exclusively in London and most of my ready-to-wear clothes and accessories were also made in England. Today I have a much less enthusiastic and romantic perception of Savile Row and English tailoring. This has several reasons. Time seems to have stood still in London which is good in some respects but a problem in others. Not everybody wants to look like a member of the British upperclass of 50 years ago. Italian tailoring was much more successful in rejuvenating itself again and again. Even masters of the old generation like Antonio Liverano or Antonio Panico are able to make really attractive suits for a slim young customer.

In my opinion it’s a weakness of the big British tailoring houses that most of them are owned or managed by people who are not tailors, let alone the ones who cut every garment. The best example of the opposite situation is Cifonelli in Paris. The French tailoring house is a pretty large operation, nevertheless the suits are not cut by employed cutters. Massimo and Lorenzo Cifonelli personally cut (and fit) every single garment. In Savile Row it was customary way into the 1970s that the proprietors of small to medium sized businesses were cutters who fitted all customers personally. These days seem to be over. I believe that the future of English bespoke tailoring lies in one-man operations, they might become the standard bearers of Savile Row style. One example is for me James Whitfield. It doesn’t make a difference that he works in Berlin. It might even be an advantage because he is not dependent on the freelance coat and trousers makers working for most of the shops in Savile Row. James employs tailors he has trained himself which guarantees a steady level of quality.

The first fitting was a “toile”, this time James had cut my fabric from Scabal. Only the sleeves were fitted as a “toile“ again because the position of my arms hadn’t yet been marked on the checked fabric. Checks are supposed to continue from the front parts to the sleeves. If the checks don’t match in a relaxed arm position they’d have to be recut. Once James had helped me into the basted garment I felt it fit very well even before I looked into the mirror. At the “toile”-stage the armholes had pinched me a bit and James wanted to fix this for the next stage. Now the armholes fitted perfectly. They are high and rather small but not too small. The visual impression of the jacket in the mirror exceeded my expectations, it looked very well balanced. Slightly wider shoulders, a little bit of chest drape, the lapels rolling perfectly towards the top button of the three-button front, the right amount of waist suppression and exactly the right length. We briefly discussed the positions of the buttons. James showed me two options, the slightly higher position being the one he favoured. At first I preferred the buttons about 1,5 cm lower but when James had pinned the jacket at the higher point I agreed with him.

The jacket is a bit longer than the jacket from Salon Hartl in Prague I wore that day. Although I am perfectly happy with its length I found the longer jacket that James had cut to be beautiful. It’s difficult to focus on the length alone, it has to be a balance as part of the complete picture. The jacket that James has cut has a slightly higher waist and the shoulders are a bit wider, for this style the length is just right. And of course the slightly longer jacket is one of James’s trademarks and I must say that after many years of abstaining from Savile Row tailoring I really love the look of this length. The jacket fits perfectly around the shoulder blades and it has a very snug fit in the hollow of my back. Many customers don’t pay much attention to the backside of a bespoke jacket but I find that it says a lot about the skills of the cutter. James is not of the overly emotional kind but I sensed that he was quite happy with the fitting as well. I tried to put my feelings into words when I told James that he has “reignited my enthusiasm for English tailoring”. I look forward to seeing the finished jacket when we meet the next time.