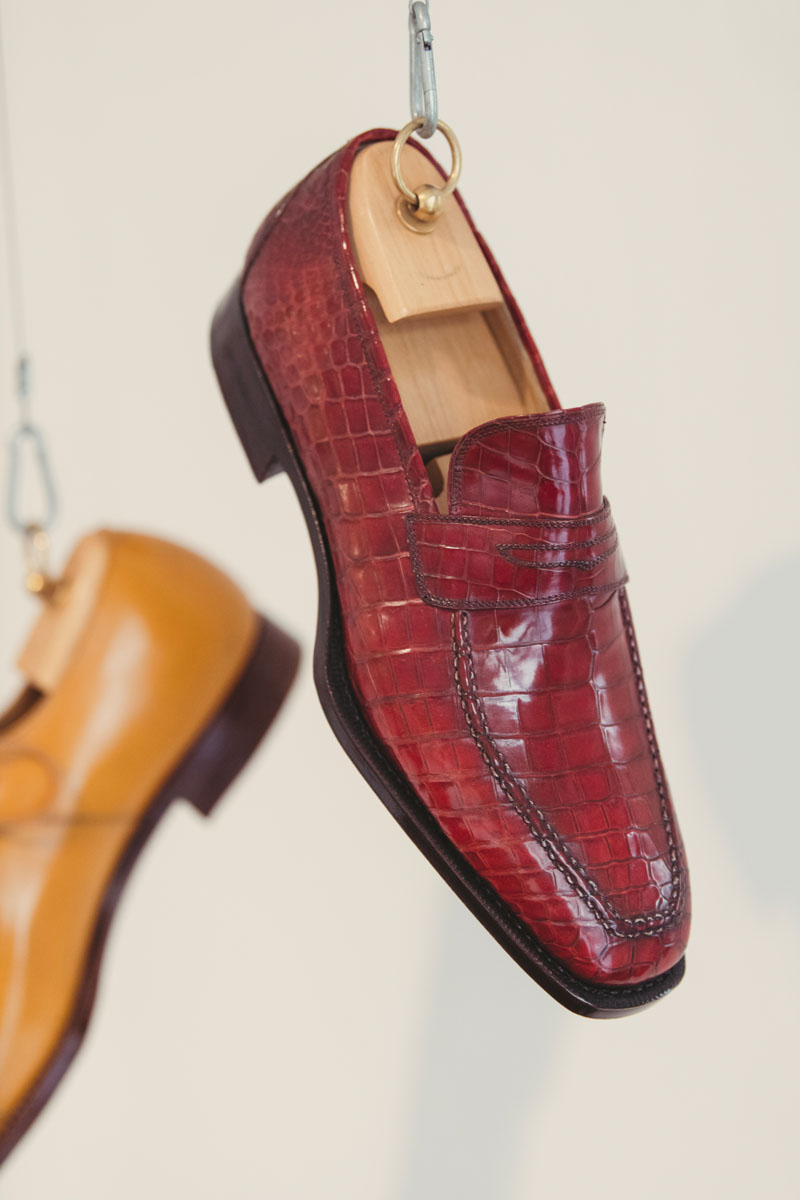 In terms of sheer numbers, there is perhaps no city that matches up to Florence when it comes to bespoke shoe makers. However, only one of them is female. This superwoman exists and she is German. Her name is Vivian Saskia Wittmer and we recently took a trip to her workshop in Italy, where she has been living and crafting shoes for over twenty years.

Women are truly a rarity in bespoke shoe making. Interestingly, most of the women that do practice this fine craft tend to be from the German-speaking world. Prominent examples include Hennemann and Braun in Berlin or Doris Pfaffenlehner in Austria. It should go without saying that the craft always remains the same and the shoes will be no different whether they are made by a man or a woman. One might speculate that the idea of having a woman make one’s shoes might be appealing to certain male customers, perhaps in a belief that women possess some innate sensibility or intuition that might lead to optimal results in the process of last-making. What I can say with certainty is that Vivian Saskia Wittmer would laugh off such suggestions. When discussing her work, she strays away from some of the more esoteric beliefs about her profession. Her goal is simply and humbly to make very good shoes.

Originally from Berlin, Vivian Saskia Wittmer learned her craft in Hamburg between 1993 and 1996 under the tutelage of arguably Germany’s most renowned bespoke shoe maker Benjamin Klemann. After completing her Gesellenprüfung (the final examination required in Germany to achieve the status of bespoke shoe maker), she applied to work for Stefano Bemer in Florence. At that time, she hadn’t yet learned any Italian and Bemer spoke no German and only basic English. However, all craftspeople speak a common language. After three years with Bemer, in the year 2000, Wittmer decided to strike out on her own. As a German female bespoke shoe maker. In Florence, no less. Florence is not only one of the global capitals of bespoke shoemaking but also the location of the world’s largest and most famous menswear gathering, Pitti Uomo. At first, she mostly made shoes for friends and acquaintances, while developing her own samples. Her shoes became her apostles, spreading her message to the masses and now, over twenty years later, she has customers all around the world.

Considering Vivian Saskia Wittmer’s relative status as a new kid on the block of bespoke shoe making (Markus Scheer in Vienna, for example, is a seventh generation shoe maker), she has a very large number of sample shoes. Particularly striking is the quality of the craftswomanship and the slimness of the silhouette. When taking measurements, she uses paper, pencil, and a tape measure. She eschews the impression foam typical of shoemakers who have learned under orthopaedic shoemakers. She trusts in what her eyes see and her fingertips feel. Overly complex problem feet are not her area of expertise. That being said, she is not opposed to working already-existing insoles into her shoes. She feels comfortable working with smaller issues like bunions and will accommodate the problem area while still making the best-looking shoe possible.

Bespoke shoe making enthusiasts will spend hours debating whether fitting shoes are necessary or not. Even the makers themselves are divided on this subject. Vienna’s Scheer always provides fitting shoes, while Vickermann & Stoya in Baden-Baden use them to give the customer extra confidence. On the other hand, Kay Gundlack in Parchim (in the state of Mecklenburg-Vorpommern) and Materna in Vienna choose to forego this extra step altogether. Some famous British makers (e.g. George Cleverley) will let their customers try their shoes on after the upper and the welt have been sewn to the insole. Saskia Wittmer also takes this approach. For her, the final shoe is too far removed from the fitting shoe. As such, she prefers to let the customer try their shoes on only once they are much closer to completion. Most customers only need small tweaks (if any) at this stage.

If you are looking to commission shoes with Saskia Wittmer, prices start at around €3600 (this does not include the cost of the first bespoke last). She currently does not go to trunk shows but is considering coming to Germany in the near future.