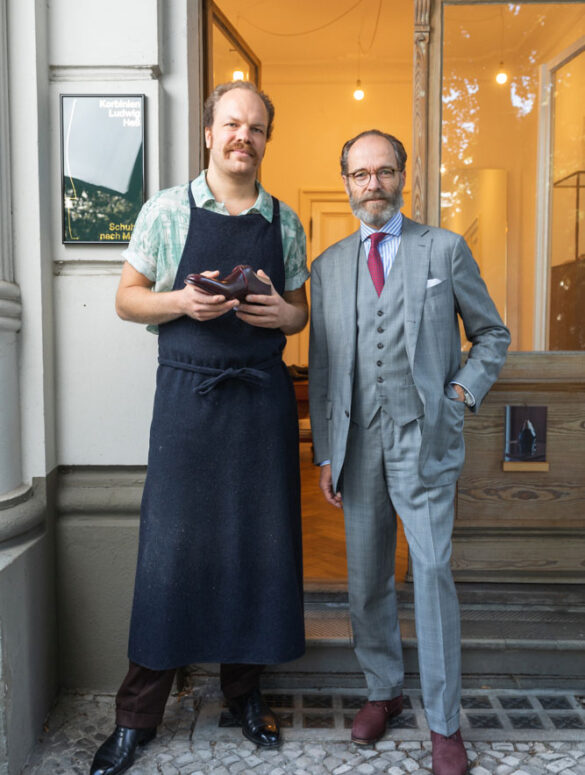 What is the present situation like for bespoke shoemakers? Everybody speaks about fashion retail but what is happening in the workshops? We spoke to bespoke shoemaker Korbinian Ludwig Heß in Berlin and got the chance to see three new pairs of shoes he’s finished. Our readers are familiar with the Munich born cobbler from an earlier report as are Martin Smolka and Tommi Aittala because they shot the images for the book “Herrenschuhe nach Maß” in his workshop.

Bernhard Roetzel: You’ve just finished three interesting pairs of shoes. Before we speak about them. What the situation is like for you in the moment?

Korbinian Ludwig Heß: In fact things haven’t changed much for us because of Corona. As a craftsman I’ve am allowed to open my shop every day. Thanks to a good number of orders we can afford to wait a little longer for customers from other parts of Germany or abroad. We don’t only sit around the little kitchen table anymore. And we keep a bit more of a distance to each other in the workshop.

I wrote something similar in one of newsletters saying that craftsmen can adapt more easily to the situation than retailers. So your local customers still come in?

A few commissions have been cancelled or postponed, the recent weeks very rather quiet. But there were some customers who were so curious that they came to see us nonetheless, for example from Düsseldorf and Hamburg.

Do you think a renaissance of local craftsmanship will be benefited by the “Coronoa crisis”?

I don’t believe in the theory that people will be more careful about spending their money, I think it’s nonsense. I think the contrary is the case. Money will be spent. And yes, we will benefit from this when it happens.

We have met because you have just finished three rather extraordinary pairs of shoes. Thank you for giving us the opportunity to see them before they will be collected. Would you like to present the shoes to us now?

Here is a three eyelit blucher with a handsewn tab and a polished cap made of black Chromexcel. This leather is from Horween in Chikago, it is first tanned with Chrome and then with a vegetabile tanning. Afterwards it is finished under heat with oils, waxes and fat which gives it a characteristic liveliness, a waxy touch and a smell reminiscent of a warm sheepskin.

This is our version of a Jodhpur boot, made of the same leather but in brown. Our strap is not wrapped around the whole leg, it only wraps around the heel. This way we can keep the uppers lower which gives the shoe a more casual appearance. It’s is also easier to put the shoe on and take it off. In my opinion this is the shoe of all shoes.

This shoe is made of leather from the same tannery but from a different animal. It’s a full brogue made of shell cordovan. The double sole corresponds with the sturdiness and longevity of Cordovan. One of the soles is hand stitched, the other woodpegged. This shoe needs breaking in, an absolute classic that will last very long.

Of course you cannot give away personal details about your customers. Could you give us a few hints nonetheless about how the shape and the material of these shoes came about?

The gentleman who ordered the blucher already owns six pairs of shoes that I made for him. He’s got almost all the classics, a pair of black bluchers was a good idea. The relationship with this customer is very special. We’ve known each other for a couple of years now and he sends me photos of shoes once in a while. But also pictures of cars or furniture to inspire me and sometimes songs. We meet and talk about the next pair of shoes, but never not in great detail. He really gives me plenty of rope when but he has always been happy with the result so far.

The gentleman who will get the boot saw the ones I made for myself eight years ago and he wanted exactly the same.

You can’t get around a cordovan full brogue if you like classical shoes. The blunt shape of the toebox was inspired by some old shoes of this customer which were one of his favourite pairs. These brogues are also inspired by the traditional wingtip brogues made by shoemakers in Budapest.

How important is a trial shoe for follow-up orders? Do you make trial shoes for each new order?

I don’t need to build a second pair trial shoes if the first order is an Oxford and the next order a Derby shoe. But I need to build different lasts for a slip-ons and for lace-ups and boots and ankle boots need yet another type of last. If a customer sticks with one type of shoes no further trial shoes are necessary. Once he switches styles we will do another fitting. And I never make a second pair unless I’ve seen the first pair worn by the customer.

What is the biggest challenge for a bespoke shoemaker? What is the root of his success?

In my opinion there are no “good” or “bad” bespoke shoemakers. A bespoke shoe represents a very personal collaboration of customer and shoemaker. If there is no good chemistry between them the shoe is destined to become a failure. Of course a shoemaker needs to have some basic prerequisites. Certain skills and some knowledge about the foot and all that. But already when it comes to his eye for aesthetics it becomes very individual. A “good shoemaker” will realize at an early stage that the collaboration will not succeed and he will end it. In the beginning this is hard to do because the financial side is important too but it will pay off in the long run.

The photographs for this article were taken by Tommi Aittala. Please also visit the website of Korbinian Ludwig Heß.