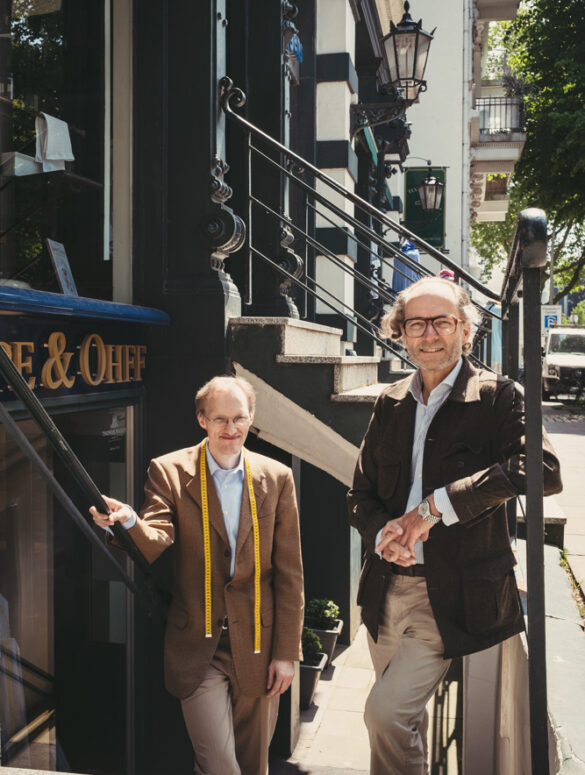 Three young men become friends while they serve at the German armed forces. They have the idea to jointly found a business. The three are Friedrich von Schönfels, Christian Ohff and Christian von Campe. In 1995, they finalize their plan. They intend to start to produce made-to-measure shirts. Those who have experienced these years might be able to understand the motivation of the three friends. Classical menswear was rediscovered by a new generation, many young men developed a passion for welted footwear and handmade suits from England. The “Sloane Ranger Handbook” was their Bible and they cultivated English style in Hamburg, Frankfurt or Munich. I’m a child of this time myself.

In 1996, the plans take shape and the three friends travel through Europe visiting fabric suppliers and manufacturers. There is a car accident on one of the trips, fatal for Christian Ohff. A terrible blow for the family and friends. Despite the tragic event everybody wants to keep the idea idea alive that has driven the three friends and with the idea the memory of Christian Ohff. His younger brother Hans-Henrik Ohff joins the company and takes his place. In August 1996, the Campe & Ohff GmbH was founded. The following November the first mail-order catalogue is sent out by Hans-Henrik Ohff and Christian von Campe. The shirts are made by a small manufacturer in the south of Germany. In 1997, the production is moved to Poland. Later the same year a shop is opened in Hamburg. In 1998, Campe & Ohff takes over a small but modern and experienced shirt manufacturer in Lauterbach in the federal state of Hesse. Since then all shirts and blouses sold in their two shops in Hamburg and Berlin, online and at various events and trunkshows are made there. In Vienna, Campe & Ohff has been visiting Jungmann & Neffe regularly almost continously for 15 years.

I have been aware of Campe & Ohff for about 15 years but I’ve never tried their service in all these years although their offer is interesting and rather unique. Made-to-measure shirts cut and sewn in Germany of Italian and Swiss fabrics at an affordable price. The shirts start at 85 Euro, the average price is about 100 Euro. When I visited the company’s Hamburg shop I finally ordered a shirt. The shop is not located in an expensive inner city area but in Harvestehude, one of Hamburg’s most prestigious residential quarters. The premises comprise two rooms, the sales room and an office. On the shelves fabric samples and collar styles are on display, also some ties and a couple of shoes made by Maftei. Campe & Ohff have been working with the Viennese bespoke shoemaker for many years and I have met him there to try on the sample shoes he’s made for me.

Hans-Henrik Ohff sees us coming down the iron stairs outside the shop that lead to the basement and comes to the door to welcome us. He wears a lightweight wool sports jacket and an open-necked shirt paired with chinos and bespoke shoes from Maftei. A little bit of white t-shirt is visible. Hans-Henrik Ohff looks like I imagine his customers to look like, he could be a doctor, a lawyer or a merchant. He speaks with a silent voice and a frequently has a twinkle in his eyes. It is hardly noticeable that he takes in all details of my figure and posture with the eye of the experienced shirtmaker while we chat about the history of his company. He takes the usual measurements including the circumference of the upper arm. He doesn’t use a sample shirt to check the measurements in relation to their pattern, he’d only ask a customer to try on one of their shirts in case of recurrent problems with the fit. Afterwards I pick a checked fabric from Alumo’s Twill Soprano range, one of my favourite collections from the Swiss weavers. For the collar I choose a fused cutaway style with a medium weight interlining and thin mother of pearl buttons. It will take about four weeks to the finished shirt.

Campe & Ohff continue sending their customers printed catalogues and cloth samples by mail in addition to their digital newsletter. According to Hans-Henrik Ohff customers still like to touch the samples. A moment later a customer enters the shop and asks for a fabric that he has seen in one of their mailings. It is still in stock and he orders three shirts. He agrees to have his measurements checked but refuses to have only one shirt out of the three made first to make sure everything is okay. “It should fit” he remarks with subtle irony and Hans-Henrik Ohff doesn’t seem to disagree.