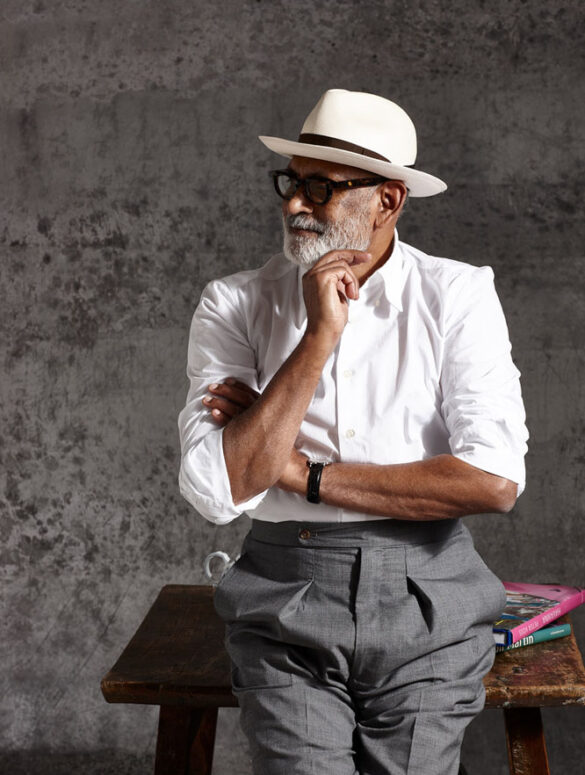 Education is what comes from experience —
Interview with Ignatious Joseph

Ignatious Joseph ranks among the foremost shirt designers in the menswear business. The yellow boxes with his shirts are on offer in some of the world’s best menswear shops. He never speaks about his private life, in our exclusive interview he shared some very interesting thoughts about his style and sartorial culture.

Feine Herr: I think we met for the first time in Cologne at Herrenmodewoche in 1999. Was that the year you started your business?

You were born in Sri Lanka. What brought you to Düsseldorf?

I think it was the train. I was a student and could not afford a car at the time.

What is the idea behind your shirts? What makes them special?

It is quite simple really. I came from a very hot, generally humid climate. Still my generation was taught to dress in the way of those who administered our country, you know the British, did. Maybe you have heard the Noel Coward song “Mad Dogs and Englishmen”. Coward was saying that only the English were so inflexible that even the tropical climate did not change their dress or habits. There is a wonderful ironic image conjured by Jules Verne in his story “Around the World in 80 Days”—filmed in 1956 I believe with David Niven. Now most people concentrate on the extraordinary lengths that the hero, Fogg, goes to reach the Reform Club in London on time to collect his wager. Verne however depicts a man who travels around the world and regardless of his situation, never actually leaves England. What I am trying to say is that we grew up emulating a manner of dress totally foreign to us and unsuited to the climate.

When I left Sri Lanka I was not about to change my habits of dress—but I wanted shirting that I could literally wear in any climate or condition—humid or dry, on the parquet or the pitch, and still look smart. I would never dream of wearing a teeshirt as an outer garment—but my shirts are just as comfortable.

The packaging of your shirts is very special. What’s the story behind the yellow boxes?

Have you ever eaten M&Ms? Well the slogan for these sweets—based on what are called “smarties” in Germany—was “melts in your mouth, not in your hands”. I always hated picking up a piece of fine cloth that I was intended to wear that had been handled by who knows how many other people. The yellow box—well that is the colour we associate with light. Frankly too many men’s clothing shops are dark and rather dreary. So I wanted the customer lighten up when he sees those boxes. At the same time he should be able to see and feel everything he needs to sense when making his selection—but without spoiling the form in the shop. From a practical point of view, boxes are much easier to handle and store too.

Everybody spoke about the man with the red shoes when you started. Can you tell us about these shoes?

It is an old story. Actually I do not think about it any more. But to keep it short: I grew up playing cricket. In that part of the world, football—although originally English too—never caught on. Cricket has a dress code. At certain levels of the game one only wears white kit; that includes the boots. As a lad the cricket boots were the most important footwear one had. Now I was always interested in smart dressing, even as a youth. I wanted some smart shoes too. However my parents were not about to spend money on fancy shoes for a growing boy. So one day I got the idea of buying some red dye and painting my cricket boots red. This impressed all my mates. My parents were not impressed at all. In fact my father gave me a good thrashing. Well that kind of price only made me stubborn. Of course whenever I have gone to the crease, I wore white boots. But since then all my other shoes are red.

I do not have a formula. Sartorial culture is the product of experience and education. I do not mean you have to have a doctorate to dress well. Education is what comes from experience and reflection about those experiences and the knowledge from life. Sometimes that has a formal quality but it always means observation, sensitivity to the world around you and reflecting about what one does. I grew up, as I just said, with English sartorial habits in one of Britain’s south Asian colonies. However I am not English. No matter how long I live I will not be English and therefore I can never dress like an Englishman. I have lived most of my life in Germany, which is part of the western peninsula of Eurasia. You could also say it is part of the European sub-continentwith a population close to that of West Bengal. That means I have also been influenced by the variations of dress one can find in this part of the world. I started with my general preferences that I learned at home and then adapted what I found through travel and other experience until I found what suited me. Since then I have my suits made accordingly.

What you wear is obviously not off-the-peg. Would you reveal the names of some of the tailors you’ve used?

That would be indiscrete.

Although your shirts appear to be very Italian your style is rooted in the English tradition, isn’t? Could you tell us a bit about your childhood and youth?

I have already told you one story, which I think reflects the essence of my youth. But to your first question: Let me say this. The English—that is to say those who made the British Empire—ruled the Mediterranean Sea until the end of the Second World War. The English dominated trade in the region and the Royal Navy controlled the main ports, for example the port of Naples. It was the English who created the demand for much of what became known as English style that actually originated in Italy. E. Marinella, the famous neckwear manufacturer, made its name supplying ties to the English. The Grand Hotel Parker, one of the best hotels in Italy, has an English name because it was bought by an Englishman named Parker, as the story goes with a cheque to settle the heavily indebted house.

In other words, Italian style and English tradition have been inseparable at least since Napoleon’s final defeat in 1815.

Your shirts are sold everywhere in the world. What is the secret of your success?

Since I do not advertise and have no other incentives available, I suppose it is because the people who sell my shirts like them. I like to think it is also because they are the best of their class for the money. However if you look where they are sold then it is also because there remains a market for discriminating buyers and those who are well dressed or aspire to be.

Can you give our readers some advice on how to dress well?

Perhaps it is not advice that everyone can use, but let me suggest two steps: look at yourself as you really are. Then ask yourself how do you want people to see that real you. More advice than that would be presumptuous.