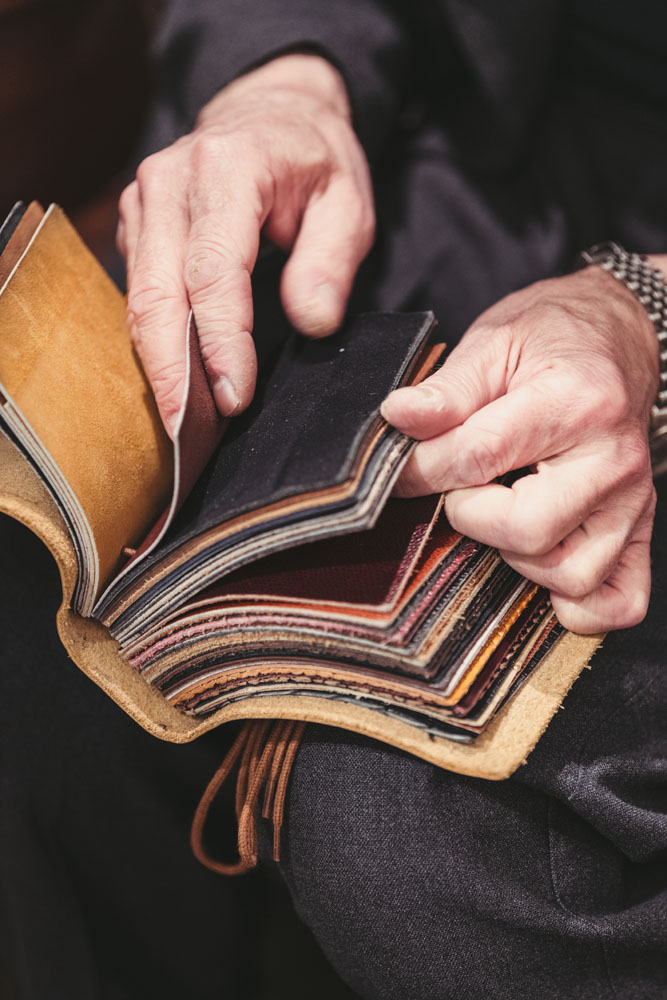 A pair of bespoke shoes from Maftei in Vienna —
Part 1: The Order

I remember well the first time I watched a bespoke shoemaker at work. It was in 1990 in Hannover during a trunkshow with John Lobb Paris at H. B. Möller —  one of Germany’s best menswear stores (now Möller & Möller). The French cobbler showed how he fitted the trial shoe and cut it open afterwards. He also demonstrated hand-welting and sole-stitching. Since then I have seen many other shoemakers at work but their craft still fascinates me. I was very keen to meet Viennese shoemaker Lucian Maftei in Hamburg at Ladage & Oelke. I had met his father Alexandru in Vienna before and also to other members of this family of shoemakers, Raz and Stefan Maftei.

Alexandru and Lucian Maftei have been touring Germany for more than 20 years. The north is covered by Lucian, the south by Alexandru. Their workshop is located in Romania, the family’s country of origin. Alexandru came to Vienna in the 1980s and found work as a bespoke shoemaker, and later he set up a business of his own. Today he owns a shop at Kühnplatz in Vienna. The place looks a bit deserted when you peep through the curtain behind the shop window. The business is done by appointment only. Alexandru often meets customers in their office or hotel, the shop is hardly ever used. It is worth the while to have an appointment there because the number and variety of samples standing around in the shop is impressive and inspiring. This time we had an appointment in Hamburg instead at the temporary premises ofLadage & Oelke.

Lucian Maftei was dressed in a check shirt, sports-jacket, corduroy trousers and monkstrap-shoes. The store is pretty spacious and the shoemaker looked almost a little lost standing next to a leather settee. Despite some white in his full head of hair he makes a youthful impression. His German has a slight Romanian accent but no trace of Vienna in the sound of the language. He brought plenty with him to Hamburg, half a dozen of samples, a fat bunch of leather samples and the paraphernalia for measuring. Before we started discussing my order we had a chat about his attitude towards shoe-making. Lucian shows the typical modesty of the experienced craftsman. He doesn’t want people to buy a name or a brand, he wants to persuade them through his work. Maftei is well known in Austria, Germany and a couple of other countries and his list of customers in Vienna is long. Nevertheless Maftei is seldom named alongside famous Viennese bespoke shoemakers like Scheer or Materna although he delivers the same level of quality and style judging by what I have seen myself and by what I have heard from people who wear his shoes.

Tailors usually discuss the style first and take the measurements afterwards, bespoke shoemakers can start either way. I had provided Lucian Maftei with photographs of styles to illustrate my ideas. I had briefly considered the typical Viennese wingtip Derby Brogue made of Oxblood grain leather but then quickly chose a plain four-eyelit Derby called“Spitzderby” in Vienna. I like Brogues but I rarely wear the ones I own, and simultaneously, I hardly own any Derby shoes and none made for my feet.

I take off the bespoke shoes made by Kay Gundlack and sit down. Lucian Maftei positions my right foot on a white piece of paper, then he follows the contours of my foot thus drawing its form on the paper. The same procedure for the left foot. Afterwards he held a piece of cardboard next to my foot, put the paper on top of it and noted the horizontal silhouette of my feet. Then he took an imprint of my soles on blue carbon paper and finally he measured the circumferences of the feet at several positions, eg at the ball of the foot, the arch and the heel. He added the measurements to the drawing of my feet’s contours creating the basis for the creation of the bespoke lasts. Nothing I hadn’t experienced before. I only noticed that Lucian Maftei took more time than other shoemakers to palpate my feet at the heels and the Achilles tendon. He also took a very close look at my toes and palpated my little toes to get an idea of how they would have to fit into the finished shoe. Lucian Maftei is not the chatty type and if I hadn’t asked for explanations the whole process of measuring wouldn’t have taken longer than maybe 10 minutes all in all.

I am not the type of customer who wants to determine the style of a bespoke order in every detail. I feel it interferes with the craftsman’s autonomy. I usually give him a rough outline of what is important to me. I told Lucian Maftei that I don’t want the shoe to elongate the feet and that I don’t like a square or a pointed toecap. We quickly agreed on the leather because I had already said that I wanted a claret boxcalf and he showed me two from the bunch that came into question. I have never seen so many shoes in all variations of wine red as in Vienna so I thought that this would be perfect for a shoe made by Maftei. It would be an interesting subject to find out why men in Vienna like this colour so much.

Lucian Maftei will start working on the lasts immediately after his return from Germany. Lasts are always made by the one who meets the customer, either Lucian or his father. A trial shoe will be built on these lasts and tried on in Hamburg next time Lucian Maftei visits Ladage & Oelke. We will report the outcome in part II of this story.