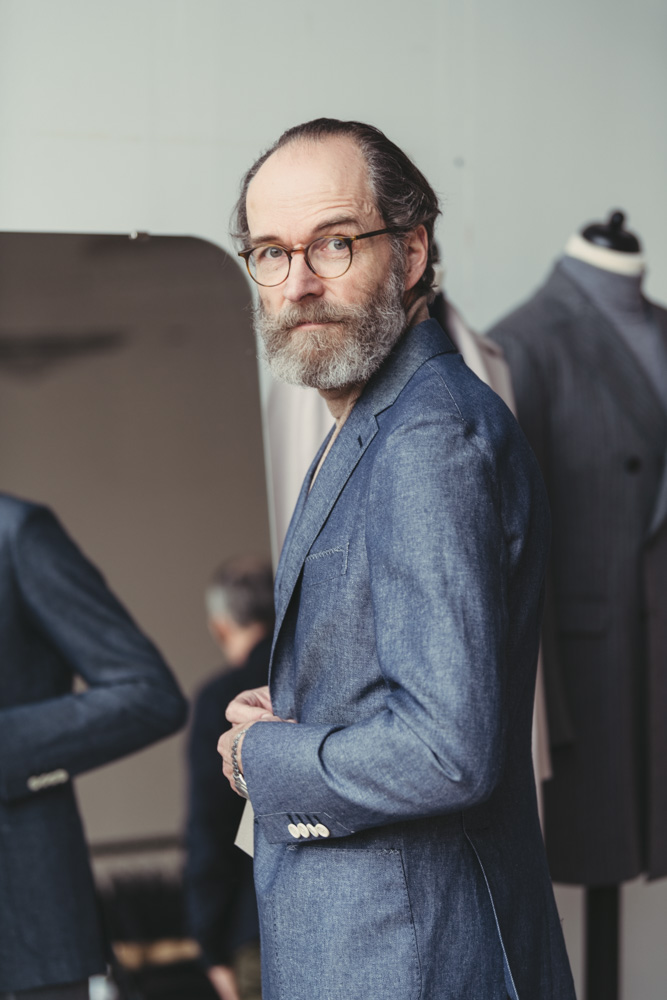 The company headquarter is hidden on a former industrial site in Uferstraße in the Berlin district of Wedding, a very multiculteral part of the city. At first glance the area appears to be deserted but then we saw a former gatehouse that was converted into a café. And suddenly a man in a suit emerged between some trucks parked in the yard and indicates with a wave of his hand to come closer. It was Ingo Brinkmeier, the „Head of Product“. It was him we spoke to when we made the appointment. He ushered us into the showroom and introduced us to Lothar Eckstein, the managing director of Manheimer Berlin, who sat there working at his laptop amidst the suits hung to the rails.

The story of the label is quickly told. Lothar Eckstein, Ingo Brinkmeier and an investor have recently started the company, the launch was in the beginning of 2020. The local press in Berlin has written about them already because the brand name has a connection to the local history. The daily newspaper „Tagesspiegel“ wrote that Valentin Manheimer was a fashion entrepreneur who founded one of the first fashion businesses in Berlin in 1837 together with his brothers. In 1889 he invented ready-to-wear fashion with Herrmann Gerson according to the newspaper. This story is all the heritage Manheimer Berlin needs, the label is rooted in the present day.

The collection comprises suits, jackets, overcoats, trousers, knitwear and some accessories. The fabrics are sourced in Italy and the garments are also made there, the quality appears to be very good. One can tell by looking at the make of the clothing. The style of the garments is rather Italian but the patterns were constructed in Berlin to ensure a good fit for the German figure. The silhouette looks best on a slim body, thanks to their made-to-measure program Manheimer can cater for everybody. Ready-to-wear and made-to-measure are produced by the same manufacturer. Manheimer Berlin focuses on their online business. As a special service to their customers a voucher for alterations is enclosed in every delivery valid only at alteration tailors that have formed a partnership with Manheimer Berlin. The overcoats are made in Berlin which is quite unusual nowadays.