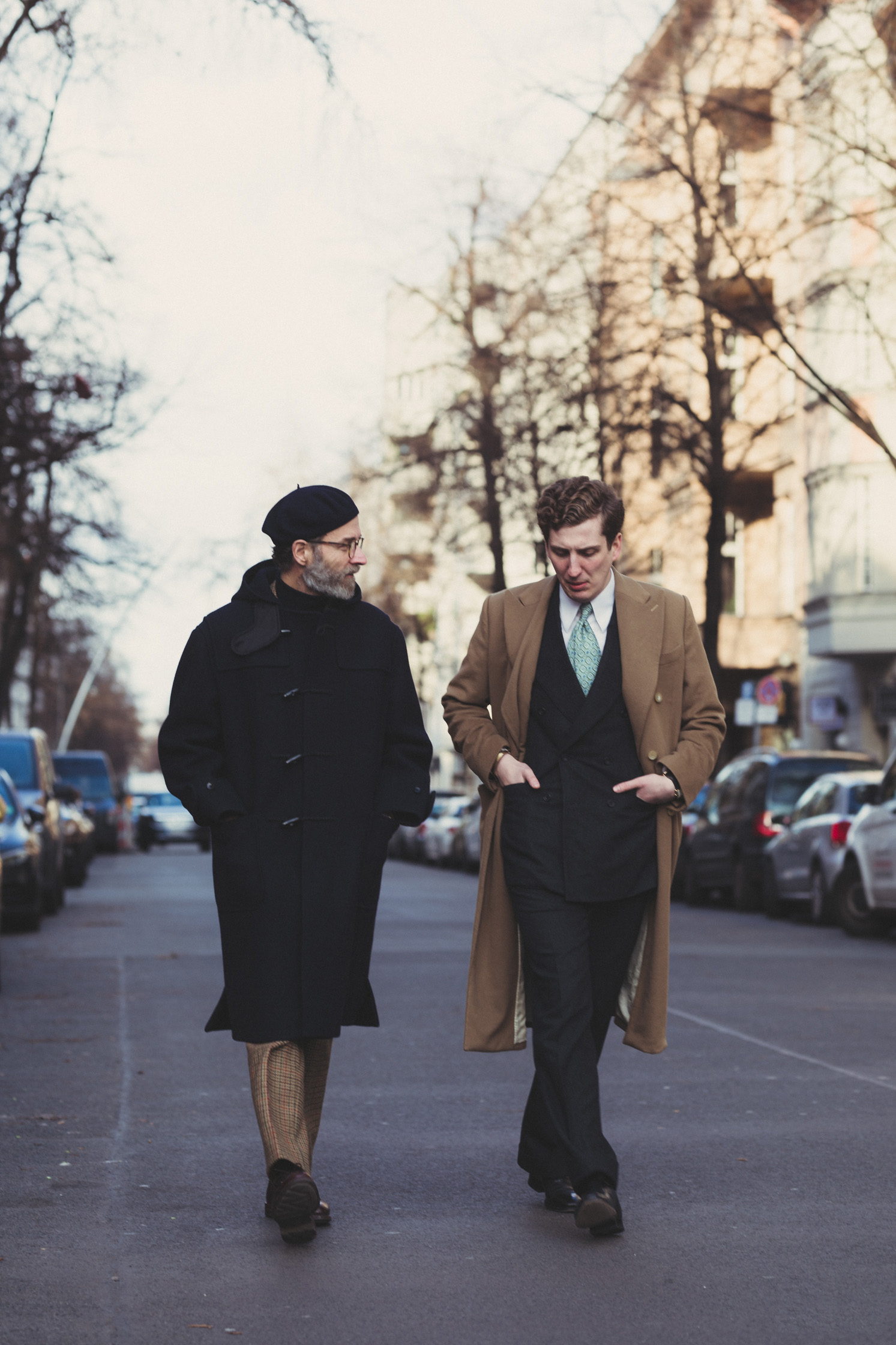 Maximilian Mogg is a style icon for his followers and customers. And he really does look very handsome. Lean, his wavy hair parted. Charcoal grey double breasted flannel suit, the tips of his shirt collar strikingly elongated, much in the style of the 1940’ies, and a printed silk necktie. He wears black oxfords, recognisably not made by Leonard Kahlke, the shoemaker from Frankfurt, where Maximilian Mogg regularly conducts trunk shows. Today Mogg is wearing — as an exception — Gaziano & Girling, the shoes make his feet appear slender, size 10,5 appears to be a 9. In Savile Row Maximilian Mogg would not stand out, there one could take him for a cutter, a stylish customer, a gallery owner or a wine dealer. In Berlin his look is unusual, even in Charlottenburg, the Berlin neighbourhood which is the most classic and Anglophile as far as the fashion goes. If one is after a covert coat with a velvet collar or corduroy pants made from Brisbane Moss corduroy, they can be found at Chelsea Farmers Club. Eau de cologne from DR Harris or soap from Trumper’s is available at the English Scent, made-to-measure suits are offered by a couple of outfitters. Tailors however have moved or passed away. Berlin’s most famous tailor Volkmar Arnulf receives his clients in Potsdam now. But there is Maximilian Mogg. Since 2018 in the Bleibtreustraße 27. The street is very well known in Berlin, it offer the typical old West-Berlin mix of partially highly specialised retailers und diverse gastronomy. The house number does not lead one into the busiest part of the street. But still. A shop window in Charlottenburg, a couple of minutes from the Kurfürstendamm, that’s quite something for a 27 year old.

One shouldn’t come by without appointment, not even during opening hours. Sometimes the door is closed, that’s when the owner is out to buy more coffee, champagne or cigarettes. Clients who plan on ordering a suit tend to make an appointment anyway. This can happen via Direct Message on Instagram. Instagram is the extension of the real-world shop window on Bleibtreustraße, Maximilian Mogg is known among Sartorialists the world over because of it.

When he’s at Pitti Uomo, the most important mens fashion fair in the world, he’s regularly stopped and photographed. Even more often now that he has sold his first collection on Mr Porter. The website advertises the collection and Maximilian Mogg with elaborately produced imagery and videos. If one meets Mogg in real life one gets to know a polite young man. He kisses the hand of women, bends the head to salute men. He speaks with a slight Moselle Franconian dialect, his English is fluent and British. And going by his name he could be British. Mogg is an English name with many variations. Based on his appearance he could pass as a cousin of the Tory politician Jacob Rees-Mogg.

His shop in Bleibtreustraße is not made to look like an English Club. The couches are Biedermeier, not Chesterfield made from leather, as frequently seen at tailor shops. The oil painting on the wall shows a bearded man reminiscent of Dostojewski. The painting is something of a hallmark for Mogg, it was already present in his apartment and former atelier in the Berlins Kreuzberg neighbourhood. Many of his Instagram-Follower know it through his online photographs. In 2006 He took his first steps towards retail in Kreuzberg with Savile-Row-Suits, which he altered for his clients. Some of those suits were second hand, but some were new. Mogg had the idea to buy suits from the London ateliers that have never been picked up by their clients. Thanks to social media and his activity as a blogger and Journalist Mogg became increasingly famous quickly. His first success was to bring the legendary bespoke tailor Edward Sexton to Berlin for a trunkshow. Sexton was a cutter at Tommy Nutter, the fashionable avantgardist among the Savile-Row-tailors. He made suits for Mick Jagger, his wife Bianca and a variety of other stars in the 1970s.

Mogg is well connected in London, he knows many professionals in Savile Row. Tailors, pattern maker, designers, but also customers with taste. That’s how he has taught himself to become a cutter, even without formal education, but rather through “learning by doing“ and by studying old cutting books. This is very counterintuitive compared with the German apprenticeship-model, but it has been common in London for more than 100 years that salesmen at the well known houses in Savile Row know cutting, but not sewing. Mogg realised quickly that he wouldn’t be able to learn to sew on the level of the tailors he met in the workshops of the West Ende. Many of them had started their apprenticeship at the age of 16, Mogg knew he was too old to start. Cutting, on the other hand, he doesn’t consider rocket science and thus he actually developed the patterns in his made-to-measure-line himself. Soon bespoke will be available at Maximilian Mogg, cut by Mogg himself. The cutting table is currently being built.

Moggs suits are made-to-measure, constructed with a full canvas. They are tried on two to three times. Mogg takes measurements in a tradition way, he only uses try-on samples if needed to check for balance and posture. Unlike retail, where selling quickly is paramount, Mogg emphasises slowness. Clients enjoy their fittings to take a break from daily life. The more often they come by and the more time they spend the better Mogg can show them cloths and talk through ideas. Many of his clients are well versed, they mostly wear Moggs Edward Sexton inspired “house style“: double breasted suits with broad lapels, high armholes and a tailored waist, a slightly lowered button stance, long vents and traditionally cut pants with pleats, side buckles and rather large leg openings.

Suits “to go“ are currently only available through Mr Porter. The Prêt-à-porter collection offered there has two distinct characteristics. The different sizes aren’t graded in a linear fashion, 54 isn’t merely a larger 48. Mogg explains that larger sizes are cut differently, to account for the different proportions. Secondly suits are cut the same way the made-to-order line is. But in stock instead of on order. In terms of price it’s not necessarily an advantage compared to the made-to-order garments, a grey, striped double breasted flannel suit made from Vitale Barberis Canonico cloth costs 1820 Euro at Mr Porter. In Berlin made-to-measure with in Italian cloth starts at 1500 Euros, with the British cloth favoured by Mogg, for example made by Fox Brothers, the cost of a double breasted suit is around 1850 Euros. Those who don’t want to wait for his in-house bespoke can meet the Slovak bespoke tailor Maximilian Mucska at Moggs once a month. His prices start at 3600 Euros. A bit of Moggs style can be had that way, too, since he consults his clients during the order process. Whatever it is the clients order at his shop, it should always be his style.