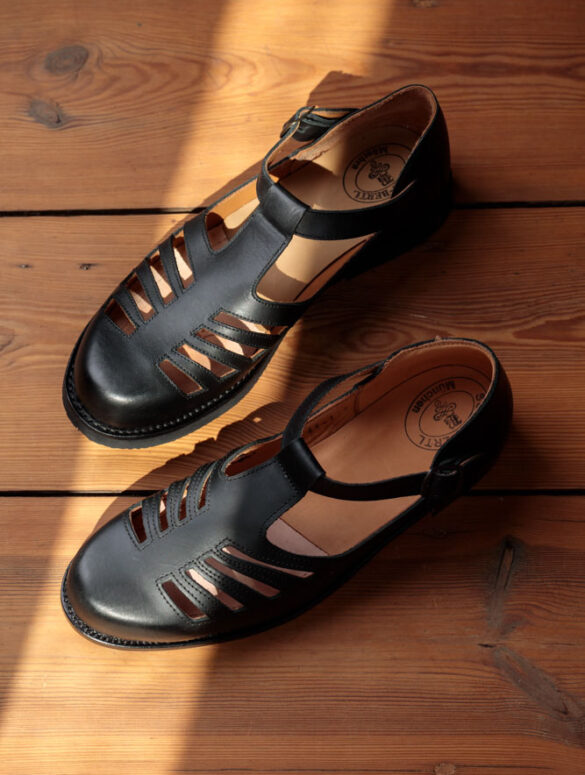 Sandals — A matter of love or hate

Flipflops are usually seen as the stylistic antithesis to classic style. Conservative dressers seem to strongly dislike them although it is very easy to find pictures showing style icons of the 1940s to 70s sporting flipflops and looking elegant. Sandals are equally unpopular among followers of permanent fashion although they are among the oldest types of shoes known to mankind. They are nevertheless not considered as classical because they seem to contradict the concept of elegance which is still rooted in the late 19th century England. In that era the body was covered up from head to toe with only the face being directly in sight (if not partly hidden under a beard or whiskers). In those days sandals were adopted by followers of different dress reform movements. Sandals symbolized the emancipation from physically restricting and unhealthy dresscodes, a gentleman in sandals was a very rare sight. Sandals also contradict the Italian idea of elegance and smart dress.

When I started getting seriously into classic menswear in the late 80s I was surprised to find a couple of sandals in the Tricker’s catalogue. I couldn’t imagine an English gentleman wearing sandals. It wasn’t until many years later that I saw sandals again in connection with classic menswear when I discovered a couple of them in the collections of some bespoke shoemakers, for instance Materna in Vienna. The Austrian manufacturer of Goodyear welted shoes Ludwig Reiter also regularly makes sandals part of his range. But how can sandals be incorporated into classic style? Classic style usually refers to suits and formalwear although the classic gentleman’s wardrobe also comprises smart casual clothes and sportswear. Worn with a dark business suit and a tie sandals would indeed be a stylistic inconsistency while they might be perfectly in keeping with the relaxed air of a linen suit. Provided that the particular type of sandals goes with the suit. This depends on the their overall look (delicate or sturdy), the soles (leather or rubber, smooth or commando type) and the amount of skin they show. Generally speaking sandals with a closed toe and heel cap are more formal and may be worn with socks while sandals open at the toes and heel are more casual, they should be worn with bare feet. The latter type should only be worn with casual outfits or sportswear.

The shoemaker Albert Bertl Kreca from Munich, known as “Schuh Bertl” (Bertl is a nickname derived from Albert which is in fact his second name also), is dedicated to the sandal and he has developed several models in the past twenty years or so. The design often follows traditional methods of making like the sandals made of a single, very long strip of leather that is braided around the last. Currently two sandals are offered in his shop in Munich and online, the Goodyear welted “City Sandale” and the “zwiegenähte Haferlsandale”. The “Citysandale” comes in brown and black either with leather or rubber soles. The brown sandal with leather soles can be worn with summer suits and jackets made of cotton or linen. The same sandal with rubber soles go well with casual outfits, for example shorts and a linen shirt. The black “Citysandale” has a number of fans who wear it with black socks and dark business suits in the office, at first sight nobody will notice that they are not wearing lace-ups. The “Haferlsandale” is a very sturdy style based on the traditional Bavarian shoe worn in the country, it looks best worn with bare feet as a part a casual weekend outfit with shorts or jeans and a poloshirt, a linen shirt or a Safarijacket or with the traditional Bavarian or Austrian “Janker” and Lederhosen.