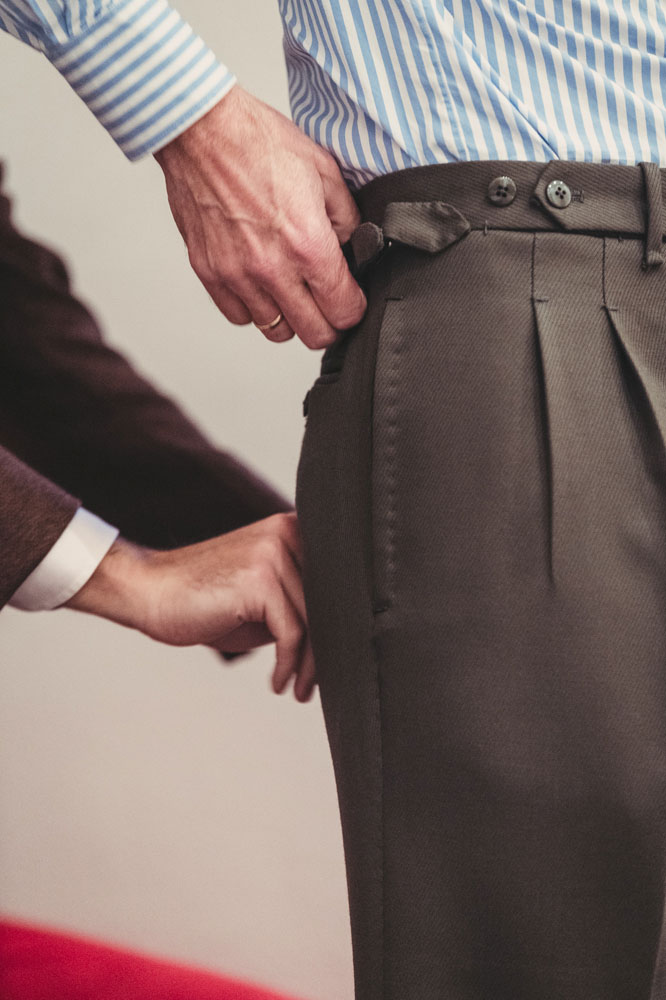 Trouserstyles —
The pleasures of choosing

For the first time in 20 years I have ordered suits with trousers made with belt-loops. To tell you why I must go back into my sartorial past.

Since I got into classical menswear I fluctuated between extremes when it comes to the cut of my trousers. Narrow and shortish to wide and pleated. This applies both to formal trousers which are part of a suit, odd trousers worn with jackets and blazers and casual trousers.

I have studied Graphic design in Hanover in the late 1980s. A couple of good men’s outfitters offered their services there, the two most remarkable ones were Heinrich’s Herrenmoden and H. B. Möller. Both ranked at the top of Germany’s menswear stores. Michael Jondral started his career as an apprentice at Heinrich’s, later he became manager and partner. H. B. Möller operates today under Möller & Möller but it is still run by Herbert B. Möller, the original owner. His son has opened his own shop Micks recently. The proprietors of both shops, Heinrich Zapke and Herbert B. Möller, both wore their trousers narrow and short and so did young Michael Jondral. He has stuck to this style more or less even though he wears his trousers a tad longer nowadays. Herbert B. Möller still wears exactly the same style as he did back then.

I liked that style a lot because these trousers looked much smarter than the wide trousers of 1980s mainstream fashion, nevertheless I didn’t copy the look. My sartorial beacon in those days was English style which offered three styles at that time. The suits of most English ready-to-wear-suits were cut rather low on the hips, usually without pleats. Belt loops were the standard style, nobody in Germany wore traditional braces with leather loops. Chester Barrie and Austin Reed were pretty big in Germany in those days and their trousers all looked like this. Maybe these and other brands with strong export businesses cut their trousers in this style because they wished to appeal to American and continental European tastes. This was style no. 1.

Very few outfitters, for example Hackett and Cordings, offered higher waisted bracetop trousers . This style was inspired by bespoke trousers of the 1930s-50s but more narrow in the leg. This “tailor made” style was completed by forward facing pleats, a button fly and side-adjusters. These trousers were worn by Sloane Rangers and their imitators from the continent and they were a kind of uniform for salespeople working in the shops, tailors and shoestores of St. James’s. This was style no. 2.

The third style was reserved for casualwear, exemplified by the corduroy and moleskin trousers sold by Cordings, Hackett or Ede & Ravenscroft. These trousers usually came with an adjustable waistband with elasticated, buttoned side straps and small forward pleats. For those who prefer to wear a belt there was a second style made with flat front and belt loops. For summerwear these styles were made of canvas.

In the late 1980s and early 90s it was practically impossible to find high rise suit trousers with forward pleats, a wide waistband, brace buttons and a button fly off-the-rack. Some Americans were the only ones offering a similar style with a higher rise and brace buttons, for example J Press or Brooks Brothers. These trousers usually came with reverse pleats or a flat front, the legs were usually wide and the bottoms offered ample space for European figures. When I lived in Hanover a Ralph Lauren store had opened and it showcased much of the collection including lounge suits, formalwear and shoes of all types. This allowed me to study the American cut of their trousers which was very 1940s inspired. I loved that style but in those days hardly anyone appreciated it.

Hackett and Cordings were pretty easily available to German customers because they sold by mail-order. I’d like to remind younger readers that online shops didn’t exist and mail-order meant catalogue business. The only store in Germany that offered a small part of the Hackett collection was Brummer in Tauentzienstraße in Berlin (the shop still exists at the same address but it operates from the first floor only selling made-to-measure clothes). A few trousers from Cordings were on sale at Smith Traditional in Hamburg at the Gänsemarkt (this shop later became the Ralph Lauren store). Out of these only Ed.Meier Munich offered corduroys cut in the English and made by a British supplier. If someone looked for this trousers style and didn’t buy at the mentioned sources he had to go to London (or Paris of course, “Old England” still existed then).

I bought many pairs of trousers between 1988 and 1992 in London, mostly at Cordings. Some of them were later used as props for my first book “Gentleman”. Outside these corduroys and moleskin trousers my favourites were a pair of very heavy flat front cavalrytwill trousers from Cordings with a raised sideseam on the outside leg. And a pair a of dark grey high rise Fresco trousers with forward pleats, side-adjusters, buttons for braces and a buttonfly (also from Cordings). These have also been photographed for “Gentleman”. In the warmer season I usually sported pleated American Chino pants for casualwear, frequently sourced at secondhand stores. I also owned a pair of brick cotton trousers from Cordings with smallish forward pleats and belt loops. The coloured faded beautifully after a couple of washes. Apart from these I also wore 501s from Levi’s regularly, preferably shrink-to-fits made in the USA. With a bit of luck they could be found in an almost new condition in some secondhand stores. Another option was asking friends to bring them from the US. I liked 501s best because of the straight leg and I wore them very short in those days.

Back then I often wondered why some cuts appealed to me when it came to the trousers of suits, while I didn’t like them for my casual pants. I assume this can be explained by the way we have learned to perceive clothes. In the 1980s the suit was no longer everyday dress (like it had been for many men in the 1960s), it was worn in business and on formal occasions. For this reason aesthetics from a different age have been preserved, especially so in the field of classical dress or permanent fashion. Since the 1960s narrower trousers had become more and more the norm for casualwear while they were not considered as correct as part of a suit. The trouser of a suit was expected to blend in, the body had to be covered up. Although I was aware of this dual view on trousers it somehow irritated me. In 2003 I asked my tailor John Coggin to cut the trousers of a new suit exactly like my favourite pair of 501s. At the fitting we saw that the waist was way too low but I liked the the narrow legs. The finished trousers were still lower in the waist than what was common then and the legs were much narrower.

In recent years the style that I have preferrred for the trousers of my suits since 1990 has made an impressive comeback. It is impossible to open one’s Instragram feed without coming across dozens of pictures of these trousers. I don’t mean to say that I dislike the style now because it has become so popular. Last fall I had a pair of bespoke trousers made by Massura Sartoria cut from a length of heavy green cavalry twill from Dugdale Bros. These trousers have turned out as the quintessence of my quest for the perfect pair of high waisted, pleated brace-top trousers with side adjusters. Moritz Kossytorz who takes the measurements and performs the fittings for Massura Sartoria understood my idea of these trousers perfectly and created an excellent cut which has become my reference for further orders of this style. Nevertheless I often thought of looking for a different style that works with a belt. Since braces do have the huge disadvantage of being rather fussy under some circumstances, especially so with three-piece suits. Braces also crumple the shirt on the shoulders and under lightweight summer jackets and can be visible through the cloth. For all these reasons I had considered ordering a suit with different trousers.

The first and successful try was a suit made of Cheviot Tweed by Salon Hartl in Prague. When I found the fabric I immediately remembered the style and sketched it on a small piece of paper. I had wanted to order a jacket with a traditional three-button front for a long time and also with a flap at the chest pocket. I sketched flatfront trousers with belt loops and frogmouth pockets. Shortly afterwards I ordered a made-to-measure suit from Massimo Pasinato’s label Madetomax. I commissioned the trousers with a lower waist compared to the bespoke trousers cut by Salon Hartl, with a flat front and belt loops. The third pair of trousers that I have ordered with belt loops will be part of a lightweight grey Glencheck suit. These trousers have a slight 1980s touch because they will have a higher waist and pleats. Pleats have the great plus of hiding the contents of the pockets, for example keys, coins and a pocket knife. It has yet to be cut by Massimo Pasinato but I do look forward to the fitting already.