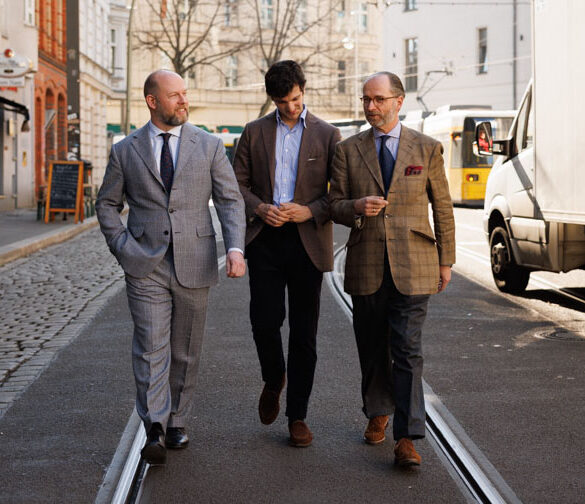 I enjoy finding and trying out new bespoke tailors because every craftsman or craftswoman offers a different solution to the problem of the ideal garment.

Twenty years ago finding a new tailor was very much a matter of walking the streets or personal recommendations. In recent years the internet has become a prime source. I like to look out for tailors who have a presence on social media but are not yet very well known. Instagram and sometimes also Facebook are good places to look for tailors.

I first noticed Dawid Kukliński in a facebook group named Bespoke forum. In this group Dawid regularly shared pictures of suits and overcoats from his workroom and they appealed to me so I contacted him by direct message. The exchange resulted in an appointment in Berlin. We chatted for a while and Dawid showed me some examples of his work. He speaks English very well so communicating was not a problem.

Every craftsman or craftswoman offers a different solution to the problem of the ideal garment.

I have tried a number of bespoke makers from Middle Europe but never a tailor from Poland. Like the Czech Republic, Slowakia, Hungary or Romania our neigbouring country in the north east has a long tradition of bespoke tailoring. Despite the common misconception bespoke tailors from Middle and East Europe also worked during communist days. The shortage of ready-to-wear clothes led to a certain demand for bespoke garments which were affordable to more people than today. The only limit was the fabric which was more difficult to find than a tailor.

Dawid belongs to the young generation of tailors. He is primarily self-taught but he has worked for one of Poland’s leading tailoring houses. He now operates on his own which guarantees the customer a very personal contact and a garment cut and made by Dawid himself. He has lots of commissions from businesspeople in Warsaw and Gdansk but he also works for a growing number of customers from other parts of Europe.

I had a cut length of a linen jacketing from Maison Hellard in France waiting on my shelf and I decided to commission Dawid to make it up into a sportscoat. I wanted him to base the cut on my favourite tweed jacket from Tobias Tailors of Savile Row which was made for me in 1998. Dawid didn’t just copy the jacket, he only took some key points of the cut and used them as the basis for his pattern. The soft, slightly wider shoulders, the high waist, a generous chest drape, the overall length and the generously cut sleeve with a deep armhole.

Opposed to the popular notion about high armholes I’ve always preferred a deeper and not too small armhole because I tend to get warm in that area. Dawid cut the collar a bit higher which I had requested as a change to the cut of my tweedjacket. We decided to fully line the jacket because the linen from Maison Hellard is of medium weight thus making it more suitable for spring and moderate heat. I also found a full lining more in keeping with the English look of the jacket.

The first fitting of the jacket took place in Gdansk only two weeks after our initial meeting in Berlin. I was in Poland to visit Emanuel Berg and Dawid came to my hotel in the morning before the factory visit. The first fitting went very well. Dawid tried on the jacket without sleeves which is typical for tailors from continental Europe. There was not much he had to improve on afterwards, at least from my observation. Already at this stage the jacket was very close to my idea.

The second fitting was scheduled about four weeks later in Berlin. The jacket was very advanced at that stage. You may have seen photos of the fitting on Instagram. Only the white baste stitches hint to the fact that the jacket wasn’t finished yet. Dawid made very few chalk marks. This is of course the way it should be at the second fitting but I have often seen fitting go differently.

Dawid delivered the jacket about 6 weeks later in Berlin when he was there for his first trunkshow in the German capital. As the jacket was made from a linen from Maison Hellard he invited Nathan Hellard to join him which allowed me to meet the creator of my jacketing.

Nathan has set up his business with the intention to carry on the great French tradition of linen weaving. The raw material that is used for his fabrics are grown exclusively in France, the yarn is presently being woven in Italy. In the long run Nathan plans to produce his fabrics completely in France. Nathan wants to offer linen fabrics outside the usual range of classic summer solids in white, beige, tan or khaki, consequently his bunch contain many pattern like glenchecks, overchecks, herringbone or gunclubs. The latter is one of the strongest sellers in the moment. The fabric I have picked is very popular with Nathan’s customers in Savile Row.

I tried on the jacket for the first immediately after I had arrived with Martin Smolka and Tommi Aittala. They photographed the moment of me slipping into the jacket for the first time. As you can tell by the photos shot by Tommi Aittala I was very happy with the way the jacket felt and also as it looked when I saw it in the mirror a moment later. Even when the second fitting goes well there is a risk that something goes wrong in the final phase.

The cut of the jacket doesn’t represent Dawid’s personal style but he liked my idea of the cut and he was happy with the result too. Dawid personally prefers a more Italian silhouette with straight, slightly sloping shoulders but he adapts to the customer’s wishes. He is a bespoke tailor after all and not a designer imposing his aesthetics on others.

Dawid plans monthly visits to Berlin, he offers a price well below those quoted by German bespoke tailors. His cutting and tailoring is of excellent quality. All in all Dawid offers very good value for money.